“Round Spirals” are a recurring topic that we discuss in the paramotor world, often after an incident occurs where a pilot gets himself into trouble (or injured, killed) while practicing them. They’re dangerous for a few reasons, the main one being they’re so fun/easy to perform that you often start performing them before you learn how and why they actually are dangerous. Among experienced pilots, it’s “common knowledge” that this is a “noob maneuver” (credit Bryan West) that requires zero skill, and usually carries more risk than benefit. 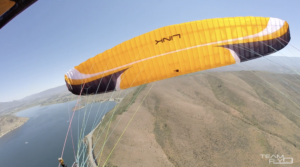 Unfortunately there is no “standard” for information of this type in the sport, so we’re here to set the precedent here and now – round spirals are in most cases very bad practice. Please read this article and watch the accompanying video before continuing them.

First, I’ll talk a bit about why the maneuver is fundamentally silly from a skills perspective, then I’ll list what could possibly go wrong in no particular order.

Freestyle flying, screwing around, acro, slalom, low level “dicking around,” are all flying styles that are reserved for pilots of a certain skill level – and those pilots who do them with style and grace take pride in the maneuvers and how they execute them. This doesn’t mean that wingovers can only be done by some elite band of paramotor pilot – not at all. It just means that if you’re making it look bad, you’re probably punching a little bit above your weight.

This maneuver, from the ground, looks about the same no matter who is doing it – save for a few subtleties. This is because it’s basically yanking in the brake and holding to a level you’re comfortable with, and hopefully recovering in some fashion above terra firma. There’s no way to make it look cooler, yet people try by pulling harder, recovering lower, basically introducing some variable that makes it more dangerous. Here’s the thing – round spirals aren’t really a skill. They’re something we survive while gaining enough experience to move on to more skilled maneuvers. And we as pilots don’t want to practice something that isn’t a skill while increasing our odds for serious injury or death, do we? Let’s shift the paradigm (credit Chris Santacroce) and change the way we look at the maneuver.

List of things that can go wrong in no particular order:

These are probably the three most common deadly mistakes, and they are not mutually exclusive, that is; a combination of these three mistakes are the primary suspected causes of round spirals that have led to injury/death. Here are some less-common causes of accidents:

Dangers aside, the bottom line is that the maneuver isn’t cool enough to be worth the risk. The most exciting thing that can happen from a successfully executed round spiral is some bystander at a nearby retirement home calls the Coast Guard because she thought you went in the ocean, launching a three-day search for your not-missing self (yes, this has happened).

Have a look at the following video, and the descriptive text below it. Round spirals have their place, but the truth of the matter is there isn’t a whole lot of payoff for the risk in learning them when you’re in that vulnerable “beginner-mediate” stage.

Round spirals are also known as “symmetrical” spirals, and are by definition an “aerobatic maneuver” – but we don’t really like to think of them that way. For sure, when you’re first getting into paramotoring they were likely one of the first thrill-seeking maneuvers that you tried out.

The fact is, they’re pretty dangerous if executed wrong, and it’s really easy to execute them wrong (pull brake and yell “woo hoo!”). They don’t take a ton of skill to execute, and they don’t teach you much about the dynamics of the glider.

We think of them as a great descent technique, which is rarely needed in paramotoring; as well as a great way to learn to manage “exits” from more skilled maneuvers like wingovers and asymmetric spirals. Depending on the intensity of the spiral, you will have excess energy that needs to be burned off before returning to straight and level flight. If you’re reading this, you’ve probably already gotten a dose of that.

Approach round spirals with the goal of learning some planning skills and energy management in maneuver exits, and once you have that down – move onto the maneuvers that require more skill.

– Understand our “measurement” system, that compares the wing’s angle to the angle of the horizon. It’s slightly confusing to watch from your computer, but this is a great way to “measure” the spiral while you’re in the maneuver. Look up at the glider as you enter the maneuver and compare it’s angle relative to the horizon. 60 degrees would be a mild spiral, 45 is pretty steep, and a 30-degree angle would be very intense. In a “full round” spiral the glider is parallel to the horizon (0 degrees) and you’re rotating around it, increasing speed and G-loading. (bad)

– A spiral usually is entered by pulling and holding the brake. If you don’t adjust this brake pressure the glider will tend to steepen on it’s own, and it’s likely to go more steep than you want. Use weight shift and “outside” (opposite) brake to modulate and control the angle.

– The whole purpose of round spirals in this video is to accelerate the glider a bit, then practice exiting on an exact heading without excess energy aka – “porpoise exit.” This means that you don’t need to hold a round spiral for two thousand feet to get good at the exits. Enter, establish a conservative angle, then start planning your exit. There’s a few reasons for avoiding the “porpoise exit:”

1. Never, ever go into a “full round” spiral or “nose down” spiral (pointing the wing at the ground). This has killed several beginner, intermediate, and even advanced pilots; due to the easy nature of getting into the situation and the difficulty to overcome the acceleration/Gforces.

2. All gliders, when pushed into a full round spiral will at some point take on a life of their own. This is a progression to learn spiral exits without ever getting to that point. Be conservative.

3. Round spirals can lose altitude faster than any maneuver we do. Do not practice this low. We suggest practicing between 2000-3000 feet AGL for this maneuver for an extra margin of safety.

4. In some cases, it’s possible for a round spiral to steepen quickly and disorient the pilot so much so that he/she forgets which brake to pull to exit. Seriously, it happens – even to good pilots. Understand the techniques described, and don’t push too hard until you’re completely in control and able to do skillful controlled exits on shallower spirals.

5. If you haven’t had formal eyes-on instruction on this maneuver, it’s great time to get in touch with your instructor and discuss these techniques, as well as assess whether or not you are at the level to do these maneuvers.